Five Ferries And A Lot Of Hills!

Which jacket should I take?

This is what was running through my head at 4 o'clock in the morning, listening to the rain hammer down. In the end I should have been worried about what factor sunscreen to wear.

This was the morning of Saturday 12th June, the day we had chosen to tackle the Isle of Wight.
At first it was just myself and Chris, but then Nick, his brother, and Ritchie signed up for the pain as well.

Chris is mad
At the end of last year he started joining me for rides and we were equally matched. Only problem was that he was only on an old mountain bike. He then stopped feeding his kids for a few months so he could buy a new road bike.
Things aren't so equal any more.
He now loves hills, so much so that he decided to do the Strava climbing challenge in one day. This involved going up and down the same hill 25 times for 7 hours for a little badge on Strava.

Nick rides an old mountain bike, things are equal at the moment.

I hadn't ridden with Ritchie before but I knew he was pretty fit so I wasn't expecting much equality here.

It worked out quite well on the ride. We stuck together most of the time but every now and then Chris and Ritchie would shoot off, leaving myself and Nick to plod along, which was to our advantage at one stage .

We met at 8 and set off to Gosport to catch the first of our five ferries. We were worried about extra numbers of festival goers on the Portsmouth to Fishbourne ferry but once we had got past the Hi-viz Hitler we sailed on.
It was on the ferry that the clockwise/anticlockwise discussion started. Apparently Ritchie struggles turning right.
We decided to follow Chris's new garmin, a bit of a mistake.

We disembarked and set of up the first of many hills.
At the top of the hill, at the lights the signposts said right but Chris and his garmin were shouting left, so we went left.
I had been advised not to go into Ryde as it is tricky to get out of but I hadn't mentioned this to Chris and his garmin route started from and more importantly finished at Ryde.
So we followed Chris down into Ryde where his garmin congratulated us for completing the course. He couldn't work out how to start it again, to be honest we didn't give him much chance, only a load of abuse.

We then decided to go low tech.
Keep the sea on our left and guess.

I wish I had studied a map before hand so I had some sort of idea of where we were but all I know is that it is a great place to cycle.
There are some good climbs but you are rewarded with stunning views.
The roads are all in pretty good condition and on the whole traffic free. I'm sure the official route is even quieter, maybe next time.

Boys will be boys

At one stage Chris and Ritchie felt the need for speed and shot off. Like responsible adults Nick and I told them to follow the signs.

As we were going along I suddenly saw a sign telling us to turn left. It was half way down a nice long gentle slope, the sort of slope down which you could really go for it.
Straight away we knew they would have missed the turning.

Do we phone them and wait or carry on and let them catch us up?

After about an hour and a few phone calls they finally caught us up.
They had got lost again.

We then stopped for lunch at The Sun Inn in Hulverston. We had gone nearly forty miles by then so we all needed it. Good honest pub food.

This is how we all felt getting back on our bikes after lunch. It was tough.
Luckily it was quite a gentle stretch to start with but then you get onto Military Road where the road snakes along the side of a cliff.
Amazing views but a lot of climbing.

Someone then had the great idea to "pop" down to the Needles. Stranglely even though you are heading to the end of the Island it is up hill.
Even stranger is that it is up hill on the way back.

Once again our lack of planning cost us.
We knew the route tooks us along the coast from Yarmouth to Cowes so we ignored the signs taking us inland. Little did we know that the official route cut back across the road we chose.
I got a sudden burst of energy and went to the front and pushed on, dropping Chris and Nick. I don't know where it came from but it didn't last. If it wasn't for a big bag of jelly babies I would have been in trouble.

The road we chose took us into Newport and then down to Cowes. It was busy, boring and up hill.

We had a nice wait for the Cowes chain ferry, which is free for pedestrians and cyclists so it gave us a chance to re-group for the final, up hill stretch to Fishbourne.

Once again Chris and Ritchie shot off, but when we got to the port there was a ferry ready to leave but no Ritchie.
He's a nice bloke but I wasn't going to wait for him.
Luckily he turned up just in time.

After another long sit down on the ferry we had to cycle back from Gosport. I've done the 7 mile route loads of times but this was the hardest.


Ritchie did text me later that evening with some advice as I had been suffering from cramp.
He recommended drinking 3 or 4 lires of water.
Unfortunately it was a bit late, I was already on the cidre by then!

Would I do it again?

Definitely.
But I would be a bit more prepared and follow the signs.

The total ride was 85 miles. Strava shows 95 as it includes the ferries. 14 of the miles are to and from Gosport this side. It is a lovely place to cycle. Fairly quite roads, challenging hills but rewarding views. 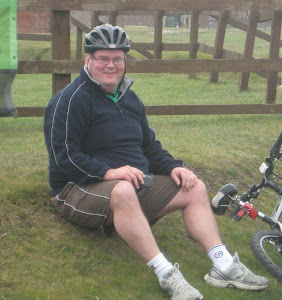